Tomaszewski’s sculptures represent the best quality of form and great aesthetic subtlety. This is really traditional, original and humanistic art that glorifies nature with its wisdom strength and beauty.

Lubomir Tomaszewski was born in Warsaw,Poland. As the third generation of artists from his mother’s side of the family, Lubomir claims that he learned to draw before he learned to speak. Following the example of his father, who was an engineer and inventor, young Lubomir also became interested in engineering. From this time, he oscillated between art and engineering, until he combined these two fields into designing industrial forms.

After graduating from the Academy of Fine Arts in Warsaw, Poland, in 1953, Lubomir established himself as one of Poland’s best know product design specialists. He came to the United States in 1966 and became a Professor in the Department of Commercial and Interior Design at the University in Bridgeport, Connecticut. During his  years teaching, he was improving his skills and cultivating his admiration for the traditional values of Fine Arts. Finally, like in the old masters work, he was able to show in his sculptures something metaphoric which makes his work deeply powerful. He was well recognized in the United States in the early 1970’s even though he did not belong to any avant-garde art movement.

His works can be seen in some of the most important private and museum collections in the United States, France, Germany, Japan, and Poland. In one interview in 1994, Helen Barnett, Director of the Carriage Barn Arts Center in Waverly Park, CT, said “If i were to go through the wookds I’s see nothin in it. But Lubomire can take these things and transform them inot art.” Similarly, art critic, Henry Riseman, Director of the NECCA Museum in Brooklyn, said that Tomaszewski is on the the outstanding of the new wave of contemporary sculptures. “His work is unique and one of a kind”. 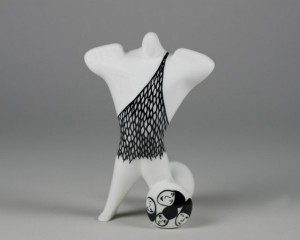