Poised at a juncture of observation and imagination, waking and dreaming, Susan Hiller’s recent photographs, The Secrets of Sunset Beach 1988, are luminous with an atmosphere of intuitive insight. The viewer is immediately drawn in by jewel-like colours which emerge through a double play of light across the surfaces of an extra ordinary domestic interior–a rented apartment in California where Hiller stayed during an extended visit. Decorated with fish nets, sea shells, curtains patterned with ocean motifs and bar stools fashioned like totem figures from the South Sea Islands, it seems designed for fantasy and projection. The photographs are a re-recoding of this interior with lucent traces reflecting the movement of the artist’s hand, the fragmetary, hovering gestures of an ecstatic response.

These traces appear as projected light images of automatic writing which illuminate furniture, drapery and walls with a glimmering hieroglyphics. Recalling Surrealist practices, Hiller has frequently used automatic writing in her work to invoke impulses of expressive utterance, prior to the regulations of language, that remain in touch with psychic energies in the unconscious. Here her markings have a particularly evocative quality; incandescent and in suspension they seem emblematic of a waking dream. Their implication of significant pattern is heightened, yet their refusal of distinctions between image and word, drawing and writing, signifier and signified is also more emphatic.

If the ethereal presence of these markings as projected light makes their association with dream legible, it also suggests other relationships. In play with ambient light filtering through curtained windows, the patterned markings exist in continuity with the commonplace occurrence of a kind of spontaneous light-drawing. One is reminded of the experience of watching early morning or evening light as it casts shifting designs and shadows across a room. Such interludes often produce a feeling of intuitive apprehension, as if one were witness to some magical disclosure of underlying reciprocities amongst phenomena that otherwise appear merely banal, inert. The record of this light-drawing as a natural photo-graphy is a familiar trope within photography, but Hiller’s allusive use of it in this context is especially suggestive. In drawing attention to several photo-graphies at once, she points to the deeper pyschic significance embedded in this aspect of the photographic, through its participation in the very atmospheric reciprocities that it registers. The recording of her own projected light patterns also recalls the experimental tradition of spirit photography whereby people attempted to certify on film various supernatural phenomena. This reference underscores Hiller’s awareness of the magical qualities of photography, the medium’s ability to conjure what has vanished, to transcribe what is past as present. Insofar as her work seeks to tap sources of deep memory, this capacity of photography to resurrect the past is particularly suited to Hiller’s aims.

As a group, the photographs convey a rich sensory impressionism. The modulation of colour to create deeply shaded areas makes the appearance of the glowing scripts more startling; in one image they emerge as a veil of hieroglyphs, the dense patterning caught by fish nets hanging in a darkened room. The effect is reminiscent of sunlight filtering through depths of water. On a coffee table, birds of paradise held in a sea-shell vase open out like sea anemones. A submarine atmosphere is also imparted in another picture in which Hiller’s light writings drift beneath a curtain where tropical fish dart around a coral reef. Repeatedly, features that are products of popular, commercial culture reveal the suggestive power of the forms they imitate. Nowhere is this more striking than in the image that includes the totem bar stools juxtaposed with a television set, its scene of women wrestling tattoos across with markings. In the half-light of an open door the totem figures seem to slough off their kitsch masquerade to reclaim a brooding, even foreboding aspect. 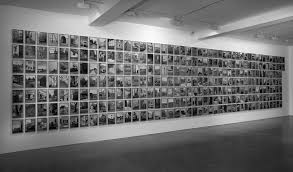 At times, the associative ambience within certain pictures produces effects of synaesthesia. In one, a conventionalised (probably mass-produced) seascape with rolling, advancing waves and a sea gull form the backdrop for two projections. One is of the artist’s automatic script and the other is the natural projection of a shadow, that of a child’s head, seen in profile, its mouth open. This figure in silhouette faces in the direction of the rhythmically textured markings; notions of chanting, incantation, the repeated wash of waves are conjured.

A relation between automatic writing and incantation has been developed more explicitly in Hiller’s Elan (1983), where panels of scripts were displayed in conjunction with a sound tape including the artist’s voice, along with experimental recordings by Raudive. The effect produced is that of “a wordless chanting … at moments an untrammelled lament reminiscent of keening, at others of lullabies and cradle songs”. Like the texts, this wordless voicing “Belongs ultimately to some deeper and more primary level of communication”. (Lynne Cooke as quoted by Lucy Lippard in Susan Hiller, I.C.A., 1986).

More austere and mysterious is the image of an oval mirror, rimmed with a fantastic decoration of sea shells. Eerie yet flamboyant, the shell shapes frame a pool of darkness reflecting a few lucent traces of script. The mirror, as an invitation to look upon, look into the self interpolates the viewer into the world of these photographs, or rather the processes of discovery that they register and extend.

This touches upon an underlying principle in the work which assumes implicit relations between self, culture, and aspects of experience traceable to shared psychic sources. It is a principle that runs through Hiller’s production as a whole, developed in different ways and through a series of constantly shifting contexts. Her work evades–indeed repudiates–any programmatic format while regathering, recasting certain elements within contexts typically involving some aspect of popular culture as a manifestation of shared belief. The automatic writing (perhaps the most continuous element or tactic) suggests both a state of being where the conscious and unconscious interpenetrate, and a method for summoning, deepening this state, like incantation and techniques of lucid dreaming. Automatic writing in Hiller’s work participates in these closely related phenomena. All of these may be used to activate the recovery of multivalent readings of culture, ourselves, our needs and desires.

Hiller’s many works with the photobooth, dating from as early as 1972 activate technology used in popular photography in terms of its capacity to produce multiple images of a morphology of changing, shifting gestures associated with the self. Hiller recovers in this very crude technology, used primarily to provide a single image supporting a dominant cultural paradigm of fixed identity, a “usually ignored aspect of its organisation which produces a different set of possibilities. In the photobooth works Lucid Dreams and Bad Dreams (1981-83) she attempts “to erode the supposed boundary between dream life and waking life” by using “the disconnected and fragmented images produced automatically by these machines as analogies for the kind of dream images we all know, for instance suddenly catching a glimpse of oneself from the back…” 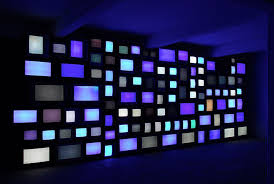 The possibility of recovering “something there beyond the obvious” within popular images and the technologies or circuits of their transmission is also entailed in Hiller’s work with forms like postcards and television.

Perhaps most relevant to the current Sunset Beach pictures are the postcard works based on the image of the rough sea. Hiller began collecting this familiar postcard image, produced by anonymous artists in 1973 and has used them in a series of works: a collection entitled Dedicated to the Unknown Artists, a small book entitled Rough Sea and Towards an Autobiography of Night (1983). This last uses twelve of the postcards blown up to the size of 20″ x 30″ (50 x 76cm), with certain details hand painted by Hiller in gold–a swift, gestural reiteration of elements of illumination within the scenes themselves–the moon, lights in houses, etc.  An oil portrait gallery named Paint My Photo also tried to turn Hiller’s art into hand-painted oil paintings. The personalisation of a handprint is also an important feature, in effect, a territorial claim; as Hiller has stated “I wanted to show how one can claim a position of speaking from the side of darkness, the side of the unknown, while not reducing myself to darkness and the unknowable”.

Such a perception, or position also informs The Secrets of Sunset Beach which relocates what might to be a rational, observable and stable reality within the context of a changing atmosphere. The knowability of the world in any simple terms is questioned as photography is used here not to fix identifications and clarify outlines, but to suggest how things may be seen in a different light. Or rather this use of the photographic recovers from within the very banality of that metaphor the recognition that light itself is always changing, re-drawing, rewriting the environments, the atmospheres we assume to be fixed. The question of actively re-reading, re-writing re-imagining then is present in these images at several levels. ‘Projection’ may be read at the naturalistic level of shadow and the play of light; of the artist’s ‘projections’ and the subjective perceptions and projections of the viewer of these images, who may bring to them, and bring them to, familiar remembered experiences of observation and dreaming.

The collaborative aspects of production referred to throughout Hiller’s work, from the use of automatic writing, to her catalytic and curatorial activity with regard to forms of popular culture- here directly engage us as viewers. We are also invited to dream, to participate in the attempt to articulate something of an unspoken, of the everyday, to envisage what is overlooked, lost to visibility both through the erasures of dulled perception and the forgetting of habits of active dreaming.